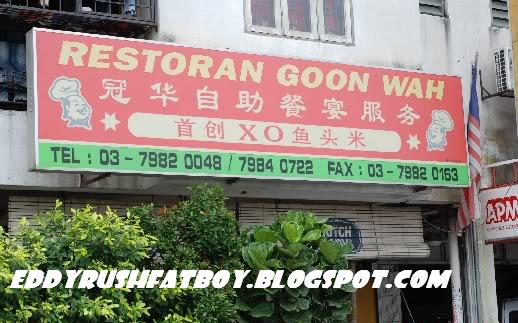 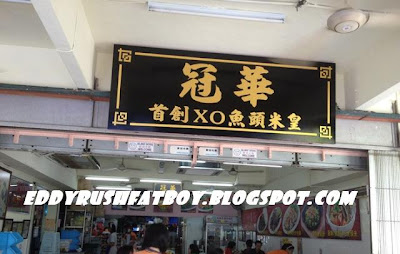 My friend Drag me to this place. As it was situated in Kuchai Lama, it wasn't too much of a hassle for me to go for breakfast. Restoran Goon Wah is supposed to be famous for their XO fish head noodles.
There was already a crowd at the restaurant upon arrival. I figured, the bigger the crowd, the better the food.but service was efficient and good. Even the food didn't take long to come


The fish head bee hoon (RM 13.90, Small) comes in a big clay-pot, definitely value for money.  Even the smallest pot is enough for two.  The fish has a crisp outer layer and it’s not oily despite that it’s been deep fried. The soup is sweet & sour, and less creamy, milky compared to other fish head bee hoon soup.The noodles seem to be home-made as I haven’t encounter this type of noodles elsewhere.  In terms of size, it is smaller than “lau shu fen”yet bigger than rice noodles.  Quite refreshing to try a different kind of noodle. The only exception of the fish head noodles here is the yam pieces.


definitely one of the best I've tasted in a long time. Although they didn't have that raw egg to mix with it, the chunks of minced pork, lard fritters, fried onions and he be (dried prawns) made up for it,I certainly would recommend this dish.
has a rather fancy name in Mandarin that loosely translates to ‘Tresure Box of Goodies’. Like the name suggests, the claypot is served on top of a box containing a fire source to keep the dish warm.

it is unique because it didn’t come as part of a dish, like part of pork noodle or pork porridge, but stood well as a dish on it’s  own.  The intestine has no funny innard smell, and  has an incredible crunchy texture.
Make sure you toss them with the sauce again because ours tasted uneven, the bottom part was pretty salty. That aside, it was a good one without any weird taste if you know what I mean.


barbecued then coated with a rich, savory sauce reduced from Stout. Expect the taste to be heavy and really addictive, one piece is never enough.

Goon Wah doesn’t have a menu as everything they have is already on the wall.....